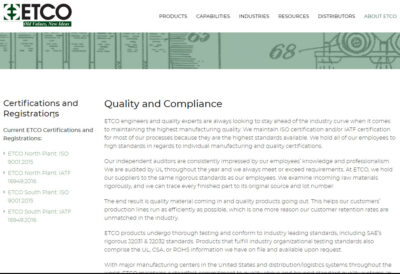 Manufacturer of custom precision stampings for automotive, appliance and medical device industries announces increase in supplier scorecard average from 95% to 97%

ETCO Incorporated announced that it has achieved a 97% manufacturing vendor rating from external surveys given to manufacturers from various industries it supplies. The company saw an increase in its already high rating of 95% to an industry high 97% for the second quarter. The 97% number is from ratings based on part quality, lead time and delivery. The high ratings demonstrate the success behind the initiatives put into place by ETCO™’s manufacturing quality team and U.S. based workers to increase supplier ratings. This came about as a result of work done to resolve a range of manufacturing issues both small and large.

ETCO averaged ratings from survey response cards from a myriad of manufacturers spanning over 10 manufacturing industries. The surveys looked at ETCO™’s handling of problem cases, packaging problems, part quality, lead time, delivery and customer impacts. Some of the manufacturing industries that were surveyed included aerospace, automotive, appliance, medical device, computer hardware and renewable energy. Across the survey, ETCO consistently reached 100% ratings by manufacturers. The ratings period covered all products shipped between the dates of April 1, 2013 and June 30, 2013. ETCO met all expectations and obligations by its manufacturing customers and partners during that time.
Fred Coyle, ETCO South’s Director of Quality states, “The increase in rating to 97% shows our commitment to our customers in providing the highest quality product.” He continues, “Though the 97% rating is impressive, we’re not going to be satisfied until we hit the 100% mark, so we will keep working towards that goal.”

Founded in 1947, ETCO is a privately owned company. The Company manufactures precision metal stampings and rubber and plastic molded products used principally by major automotive and appliance manufacturers. ETCO also has major customers in a variety of other industries in the USA and over 30 countries throughout the world. ETCO has factories and a research complex in Bradenton, Florida and a factory and engineering center in Warwick, Rhode Island.
For more information on ETCO, visit the Company website online at https://www.etco.com