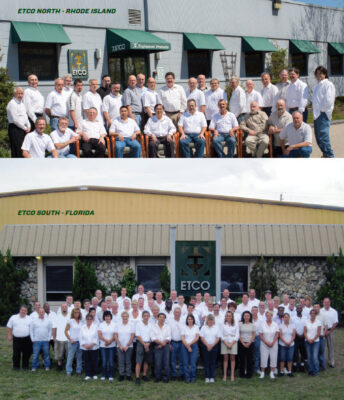 ETCO Incorporated today announced that 33 employees have worked at the company for over 20 years. While the anniversaries for each employee falls on different dates within 2014, the 20 years (and in some cases many more) of service is an unprecedented milestone being celebrated at the same time for the staff. Some of the employees started in entry level positions and now work in upper management. Others have moved up to the highest level of expertise in their direct areas of specialization. The one thing that everyone has in common is their demonstrated commitment to ETCO and the quality of their work.

A sampling of the employees and their ETCO stories include:
Paul McDowell joined the company as a tool maker 40 years ago and worked in maintaining and developing tools that ended up in automotive and appliance manufacturing applications that are still in use today. Paul is now a supervisor in ETCO’s storied tool room.

Donald King also joined the company as a tool maker over 40 years ago and currently builds and maintains tools for ETCO.

Most employees currently at ETCO share this common story of at least 5 years or more of service. Indeed the average time spent at ETCO for an employee is 10 years. ETCO’s employees share a commitment to quality, continuous improvement and innovation. This dedication to ensuring delivery of the highest quality products is one of the core reasons for ETCO’s success.

David Dunn started working for ETCO 44 years ago in sales and worked his way through various departments learning the business and building it into one of the top precision metal stamping and engineering companies in the United States. Today he leads as Chief Executive Officer and owner of the company.

Shiela Ford, manager of human resources at ETCO states, “ETCO’s focus on providing quality starts with employees” She continues, “The longevity of the employees’ time at ETCO is a testament to the cultivation of this culture.” Ford herself has been with ETCO for 38 years.

Founded in 1947, ETCO is a privately owned company. The Company manufactures precision stampings and rubber and plastic molded products used principally by major automotive and appliance manufacturers. ETCO also has major customers in a variety of other industries in the USA and over 30 countries throughout the world. ETCO has factories and a research complex in Bradenton, Florida and a factory and engineering center in Warwick, Rhode Island.

For more information on ETCO, visit the Company website online at https://www.etco.com.