A TECHNICAL PAPER WHICH REVIEWS THE ELECTRICAL INTERCONNECTION RESULTS OF MAJOR APPLIANCES FOUND IN MOST HOUSEHOLDS AND RECEIVED THE HIGHEST RATING BY THE INTERNATIONAL APPLIANCE TECHNICAL CONFERENCE, INC. FOR PAPERS SUBMITTED DURING 2005 IS BEING OFFERED BY ETCO INCORPORATED OF WARWICK, RHODE ISLAND. 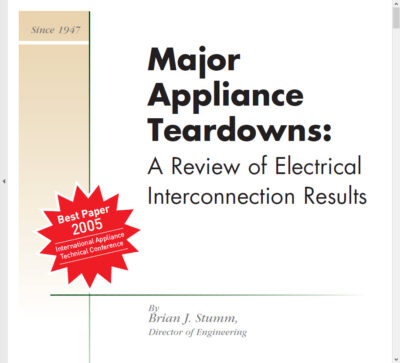 Major Appliance Teardowns: A Review of Electrical Interconnection Results is a technical paper which discusses a series of teardowns and what they revealed relative to assembly, design, manufacturing, and termination. Highlighting a number of problems in a small group of products and discussing them in depth, complete with detailed photographs, this 10-page paper can help manufacturers improve the overall quality and safety of appliances. Identifying problems such as loose fitting connector tabs and poor crimp quality which can create a fire hazard, Major Appliance Teardowns: A Review of Electrical Interconnection Results discusses how to correct them. As noted in this paper, the importance of choosing the proper terminals is often minimized due to their low cost when compared to other components.Download pdf of Major Appliance Teardowns