A patented (USA and Japan) ground blade bridge assembly for a power cord that features same direction crimp ears to speed up fabrication has been introduced by ETCO Cord Products of Warwick, Rhode Island. 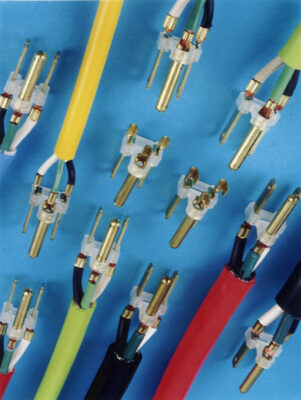 The ETCO Male Bridge Power Cord Assembly holds standard brass blades and a ground pin within a polypropylene housing and features same direction crimp ears which lets operators apply three wires in one-step to speed up fabrication. Available in two sizes for 10-12 gage and 18-14 gage wires, it is suitable for both automation and manual application techniques. Patented in both the USA and Japan (#3088079), the ETCO Male Bridge Power Cord Assembly’s same direction crimp ears simplify the application of wires and the rigidity of the finished assembly permits faster molding speeds with more consistent quality. Blades are UL 1659 certified.

The ETCO Male Bridge Power Cord Assembly is priced according to quantity and customer delivery requirements. Free samples, literature, and price quotations are available upon request.