A new aftermarket version of the Ford OEM second generation DIS terminal connection system that is functionally equivalent and readily available is being introduced by ETCO Automotive Products of Bradenton, Florida. 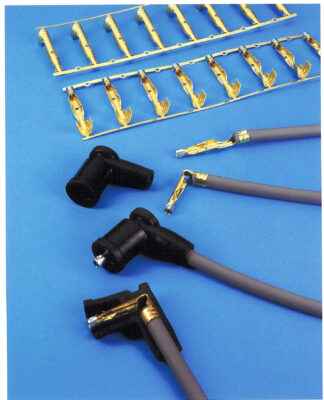 The ETCO DT1000/CB66E Assembly features a terminal strip and boot that meets OEM specifications and is ready for automated assembly by the customer. After installation to the vehicle, this coil pack interface assembly is virtually identical in appearance and function to the original parts. A suitable OEM replacement assembly, the ETCO DT1000 terminal strip is supplied on reels and can be terminated using ETCO applicators and the CB66BE boot can be applied using the ETCO bender/booter.

The ETCO DT1000/CB66E Assembly is priced according to quantity and is available with 2 week delivery. Literature and price quotations are provided upon request.